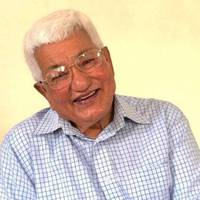 Durga Lal Shrestha, born in 1935, into a lower-middle-class family in Kathmandu, is one of Nepal’s leading poets and lyricists. Writing primarily in his mother tongue, Nepal Bhasa, the ancestral language of Kathmandu Valley, he is the author of over fifty books, including poems, plays, essays, and children’s verses used for mother-tongue education. More recently, he has also received wide acclaim for his poems and songs written in Nepali. Collections of his poems have been translated into English, Japanese, Chinese and Korean languages.