The new team at Publication nepalaya has been working for creating a fresh catalog for the year 2020 and they are now ready with 4 titles. All four titles coincidentally are authored by women. The series celebrates women writers in Nepali literature with authors representing a spectrum. The four books to be released during 2020 has stories, novels written by young promising authors, a memoir as well as a comeback creation from an author of great repute from yesteryears.

The first book in the series is to be Durga Karki’s debut book titled ‘Kumari Prashnaharu’. Kumari Prashnaharu, an anthology is a collection of thirteen short stories, written in the style of social realism. Karki is a recipient of several writing awards and is a well-read columnist. A writer by passion, Karki is a student of Law.

“We are glad to be starting our 2020 catalogue with Durga’s book” said Bhushita Vasishtha of nepa~laya. “Durga Karki’s academic background as a student of law reflects brilliantly, as she navigates deftly through the issues of social-justice, gender discrepancies seen mostly through the eyes of female characters coming of age. The astute prose and seamless story writing, for which Karki has earned considerable repute through her newspaper write-ups, find their flowering in the anthology.” Bhushita adds.

"It's particularly a gratifying feeling to hold your book, unlike anything I know so far," Karki said as she held the first copy of the book. "It has been a journey with mixed feelings of struggle and joy in the process of writing the stories. I hope my readers will receive it with love." She added.

Nepa~laya opens its 2020 catalogue at a time when the market for Nepali Publication is commented as being in a low cycle.

“Durga brings freshness through the stories she writes. I am hopeful the book adds freshness to the market and resurrects it” said Saijan Maskey, CEO of publication nepa~laya. “All four books in the series maintain a unique stylistic narration, which we believe will certainly enrich contemporary literature in Nepali.”

Scheduled to be released on 21st of February, Durga Karki’s Kurmari Prasnaharu is priced at Rs.425 for the Nepalese market. It will be available in all leading bookstores of the nation. It will also be available worldwide on Amazon. 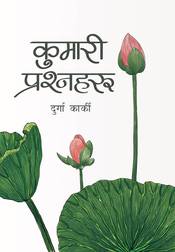