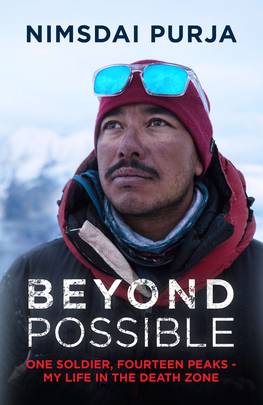 One Soldier, Fourteen Peaks — My Life In The Death Zone

An incredible true story of a modern mountaineering legend.

WELCOME TO THE DEATH ZONE.

Fourteen mountains on Earth tower over 8,000 metres above sea level, an altitude where the brain and body withers and dies. Until recently, the world record for climbing them all stood at nearly eight years.

So I announced I was summiting them in under seven months.

People laughed. They told me I was crazy, even though I'd sharpened my climbing skills on the brutal Himalayan peaks of Everest and Dhaulagiri. But I possessed more than enough belief, strength and resilience to nail the job, having taken down enemy gunmen and terrorist bomb makers while serving with the Gurkhas and the UK Special Forces.

Throughout 2019, I came alive in the death zone. Soon after, I was showing the world a new truth: that with bravery and enough heart and drive, the impossible was possible...

I looked to the peak. Clouds had swept in, an ominous rumble of thunder was echoing through the valley below, and as I watched, it felt hard not to be awed by the size and scale of what lay ahead.

I knew that judging the giant peak's strengths and weaknesses was pointless because the giant peak ahead wasn't going to judge me. Instead, there was a rush of inspiration. If I could channel the mountain's spirit, becoming bulletproof to pain, stress,  and fear, then nothing could stop me.

Then I asked the question.