'Maharani' a historical fiction by Chandra Prakash Baniya has bagged the prestigious Madan Puraskar for the year 2076. The book was published by Shikha Books.

Baniya's novel narrates the story of King Ghanashyam of Parbat and the controversy over his successor. Malebam and Bhadribam two sons of King Ghanashyam compete for the throne of Parbat, a kingdom that existed before the time of Prithvi Narayan Shah. Malebam was elder in birth whereas Bhadribam was conceived earlier and born later. When Malebam was declared the successor of King Ghanashyam, Bhadribam revolted while his wife, to everyone's surprise, supported Malebam to get rid of Bhadribam. In recognition of her efforts to save Parbat, the palace gave her the status of "Maharani". But, she took Sannyasa without letting anyone know and went to Vindravan. From that time, the people of Parbat have been worshipping her as Maharani. The book also depicts the life of the people, the justice system, and the politics of Parbat. 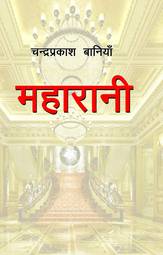