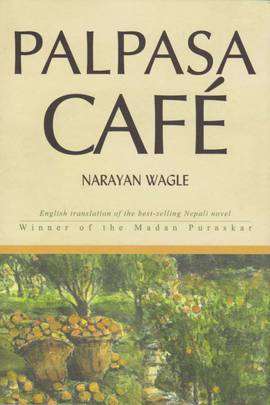 "Narayan Wagle is one of Nepal's foremost editors. During his journalistic career spanning two decades, he has travelled to many regions on reporting assignments, much of it on foot. He has had a ringside seat of the dramatic political transformation of the country as it turned from a monarchy to a republic, and went from war to peace.

His first novel, Palpasa Café, originally published in Nepali in 2005, won that year's most prestigious literary award, Madan Puraskar, and went on to become a runaway bestseller with more than 50,000 copies sold. The English edition of the novel was first published in Nepal in 2008 and later by Random House India. It has also been published in Korean, French and Sinhalese languages. Wagle's second novel, Mayur Times published in 2010 was also well received."

'...a powerful anti-war novel that will be read and talked about for years. It drags us beyond Shangri-La and forces us to look at the abyss below.' - Nepali Times

'A clever and original novel set amid the death and fear of the Maoist guerrilla war in Nepal.' - Independent

The novel revolves around the two central characters, Drishya and Palpasa, mostly moving along with its male protagonist. It is the story of an artist Drishya during the height of the civil war in Nepal. It is a part love story as well. It dwells, not only, into the effects of the civil war on the Nepali countryside that the male protagonist travels to, but also takes about the blooming love between Drishya and the first generation American Nepali, Palpasa.