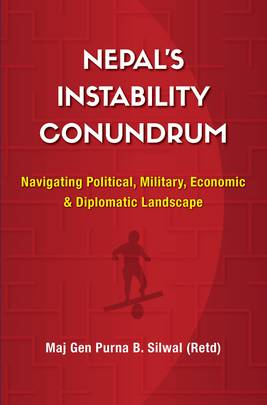 Nepal has experienced a vicious cycle of political instability since the 1950s. Multiparty democracy and constitutional monarchy (Twin-pillar system) collapsed in just one and half decades as it failed to maintain political stability and control the Maoist insurgency. The federal democratic republic has also become entangled in instability. In the last 70 years, Nepal has experienced almost all political systems, but none of them provided sustained stability and desired economic progress. This book examines the instability conundrum through five drivers: founding philosophy, national interest and threats, domestic political culture, civil-military relations, state response to armed insurgencies, and interest and Nepal strategies of external powers. Its underlying reasons and intricacies are cross-examined and discussed in the book.

Instead of focusing on advancing its interests, Nepalese stakeholders have often compromised them while serving the interest of external powers and dislodging or defending the system and government.

Without civilian control over the military, democracy cannot effectively control armed insurgency and deliver political stability. “Prithivian Trinity” could be a mantra to deter or defeat external threats and critical internal challenges.

The government's handling of the Maoist insurgency was a political mess. Had the RNA leveraged the palace-military relations for its preemptive mobilization in Dunai, subsequent major events like Holeri, Dang, and the dissolution of the twin-pillar system would have been prevented. The sovereign monarch is quite an old concept, hence became untenable in 2006.