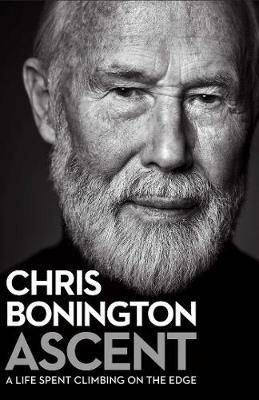 Sir Chris Bonington is Britain’s premier mountain man. Ascent will chart his childhood, and significantly the start of his love affair with the outdoors, and specifically climbing in the 1950s. His service as an officer in the army will be detailed, before his steady rise to prominence in UK mountain circles with first ascents of many British mountains, especially in the highlands of Scotland and the lake district. In detailed and thrilling narrative, Sir Chris will discuss what it takes to fund-raise, organise and then lead major climbing expeditions.
He has undertaken nineteen Himalayan expeditions, including four to Mount Everest which he climbed in 1985 at the age of fifty, and has made many first ascents in the Alps and greater ranges of the world. Along the way we will be fascinated by his many daring climbs, near-death adventures, and the many luminaries of the mountain fraternity he has climbed with, and in some cases - witness their deaths on the rock. The mercurial Dougal Haston; the legendary-tough Don Whillans, the philosopher of the rock Stephen Venables, and the enigmatic Doug Scott, plus many more – this will be an expert’s opinion on the past sixty years of British/ world mountaineering.
Ascent will also shine a light on the personal side of Sir Chris Bonington’s life and career. His wife has recently passed away after a long battle with motor neuron disease and having now spent time grieving a wife of nearly fifty years, Chris now feels ready to write his full memoirs of his life with Wendy, their struggles and triumphs, and, her final battle against a cruel disease she couldn’t beat. His many years of caring for her, and then in his twilight years finding love again amidst the sadness and grief is a truly inspirational tale.
This will be a memoir like no other. Not only a cerebral narrative on what it takes to conquer fear, and learn/ develop the technical skills necessary to climb the world’s greatest peaks, but also what it is like to survive in places no human being can ultimately reside in for longer than a few months as very high altitude.