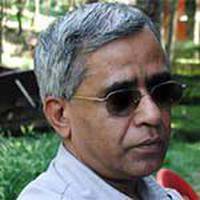 Vijaya Chalise was born in 2008 BS (1951 AD) in Kathmandu. For last many years, he has been continuously involved in literary activities encompassing many genres like stories, novels, and plays for children. He is the son of senior litterateur Ramesh Vikal.

Haraeko Murti (2056 BS/2000 AD), Kisan Bata Sikshya (2058 BS/2001 AD), and Chatakiko Bandar (2059 BS/2001 AD) are collections of short stories through which he has tried to introduce many facets of life and the world to the children. He weaves his plots in a simple language and presents in a lucid, natural and pleasant way, employing short sentences and dialogues. His stories carry no advices, but they convey important messages in indirect ways.

Mangal Grahaka Bigyan (2060 BS/ 2003 AD) and Mustangko Gupha (2061 BS/2004 AD) are novels, both of which are important from scientific point of view. The first novel presents different factual discoveries concerning the planets of the solar system and the space, made by different scientists. His second novel is bent towards informing our children about our natural wealth with a suggestion that wit and wisdom could help them beat even the adults, who are involved in bad activities. Badalka Buttaharu (2052 BS/1995 AD) is collection of four dramas. The first two plays suggest that if the latent talents of children are identified in time and allowed to flourish, they can develop into stalwart human beings in future. The latter two plays carry the message that greed is evil. He has a single biography to his credit: Sevaka Pratimurti: Dayabir Singh Kansakar (2045 BS/1988 AD).