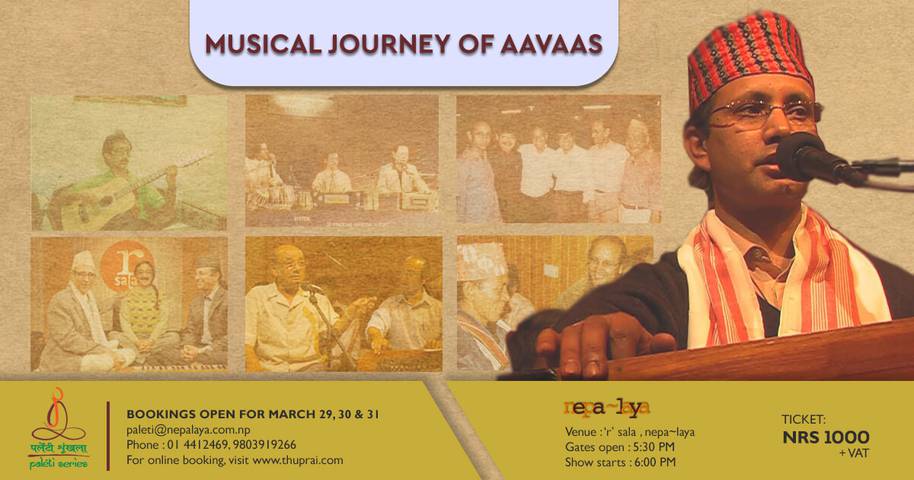 Singer and musician Aavaas is set to present himself at the March edition of Paleti this weekend. Aavaas has also contributed as the coordinator of Paleti since its inception in 2005. Paleti, is a micro concert series initiated by Nepalaya in 2005 with the aim of presenting, archiving and rejuvenating musical stalwarts of yester generation.

Paleti resumed last month after a brief interval with a new structure. “Along with presenting solo artists, Paleti will now also present theme-based shows” Kiran Shrestha of Nepalaya had said during last month’s Paleti. Following which, February concert evolved around the theme ‘Celebrating Women in Nepali Music’. This Paleti will present the musical journey of Aavaas. Aavaas will narrate his own musical journey during the process and perform his collections resembling his musical career spanning almost 40 years.

Aavaas was inclined to music since his childhood days and has experienced various facets of Nepali music over the years. During his youth days, he started his musical journey following the footsteps of Ramesh and Manjul inspired by the leftist movement and later went on to become the student of Maestro Ambar Gurung. This he says has led to widening his musical horizon. With Ramesh and Manjul, Aavaas had explored the socio-political horizon and with Amber Gurung’s guidance he learnt the human angles of music and songs.

Having made an identity as a poet as well, Aavaas masters the craft in all three areas of music - as a writer, singer and composer. His musical creations involve social, political and human emotions. His songs are a reflection of society around us. In addition to his own writings, Aavaas’ music includes lyrics of poets like Manjul, Bikram Subba, Banira Giri, Tirtha Shrestha, Biplab Pratik, Shrawan Mukarung and Bhisma Upreti.

‘I have had the opportunity to collaborate with various artist over the years while coordinating the Paleti concerts’, says Aavaas. ‘This experience has been an asset for me and the journey has been an awakening one’ he adds.

Close to 50 artists of Nepali music have already graced the Paleti stage for over a decade now. ‘It has been an honor to work with such legendary figures, whose contribution to Nepali music is immeasurable’, Aavaas says. The association with senior musicians of Nepali music has been like reading series of books’ he adds.

This Paleti – Aavaas will perform from amongst his collection along with sharing his experience of working with various artists. He has selected songs from ‘Ralpha’ and ‘Sankalpa’ years to the current time.

Paleti sessions that were held only on last Friday of the Gregorian Calendar now has been extended to last weekend, that is - Friday, Saturday and Sunday. The performance days could further be extended owing to public demand.

March edition of Paleti will take place on 29th, 30th and 31st of March at nepalaya’s ‘r’sala in Kalikasthan.

Ticket booking can be done through Paleti’s social media pages and through nepalaya. Online booking and purchase can also be made through www.thrupai.com