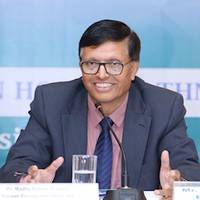 During his diplomatic career, Acharya served as Nepal’s Foreign Secretary (2002-05), Ambassador to Bangladesh (1998-2001) and Permanent Representative of Nepal to the United Nations in New York (2005-2009). He joined Nepal’s Foreign Service as Joint Secretary in the Ministry of Foreign Affairs in 1996. In 1997-1998, he was Deputy Chief of Mission in Nepal’s embassy in New Delhi, India.

Acharya has also spent some time as an international civil servant in the United Nations. He served as Director at the United Nations Assistance Mission in Iraq (2010-2011). During the 1990s, he also served in the UN missions in Cambodia, South Africa and Liberia.

In Nepal’s Civil Service, he served as Section Officer Nepal’s Ministry of Home Affairs (1983-89) and Assistant Secretary and Under-Secretary in the Ministry of Finance (1989-96).