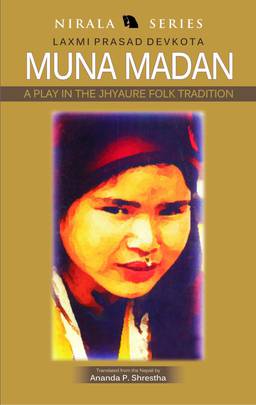 A Play in the Jhyaure Folk Tradition

A timeless classic of Nepali language, Muna Madan is a book every Nepalese holds dear to the heart. Written in popular Jhyaure folk tradition, the play weaves a moving tale of Madan who goes to Lhasa to earn an honest dream of bedecking his beloved wife, Muna, with ornaments of gold and of fulfilling the final wishes of his ailing mother. On his way back home, Madan falls sick. Drama then unfolds to capture the agony of human life caught up in the twilight of dreaming and knowing. Nepalese translator Anand P. Shrestha for the first time brings alive the immortal music that reverberates in the bloodstream of Nepalese people.

"Muna Madan is a story of migration, of a movement outside the vale of mind, the geopolitical compulsion of moving out to labor and come back to live to the rhythm of the Himalayan hills..." - Yuyutsu Sharma in Foreword

"Here is perhaps first ever authentic English translation of Mahakavi Laxmi Prasad Devkota's magnum opus, Muna Madan... comes as a watershed in the history of

“A perfect job... the translator's eighteen years devotion to the completion of this work deserves appreciation for maintaining rhythm, theme, and rhyme of the original... Commendable." - The Independent, Kathmandu